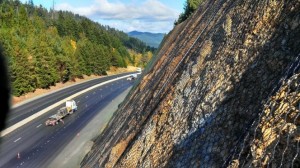 Rockfalls and rock slides pose dangers in mountainous areas that can be prevented with modern rockfall mitigation techniques that might involve rockfall draperies, measure cable nets, barriers, catchment areas, and a number of other techniques to prevent the rocks from falling to the ground below. Before a rockfall company installs any of these measures, they engage in a considerable amount of calculation to determine the likelihood of rock movement in the area. Fortunately, much of this is now done by software programs that consider the properties of falling rocks and slope stability.

Prior to the days of computer modeling, civil engineers performed calculations by hand or with handheld calculators. While today’s engineers must understand the physics, math, and geology behind the programs, they can use analysis software to predict the safety of slopes, the movement of rocks, and the impact of weather, trauma, and other factors on rock formations.

Software is often used by civil engineers to design man-made slopes either to create a new natural feature or to compensate when road cuts, embankments, landfills, or excavation changes the equilibrium. Rockfall companies who want to predict risk of falling rocks have the same concerns and use one of three computerized approaches to analyzing risk:

Software to Assess The Risk of Rockfall

A number of software packages such as SLIDE, SLOPE/W, Hydrus, ROCFALL, AutoBlock, and more use a variety of mathematical calculations developed by scientists to determine slope stability and where discontinuities might develop that lead to rockslides. While no program is perfect in predicting rock movement or rockslide, especially in the case of weather or other unplanned occurrences, the data generated is often enough to direct the professionals to suggest the proper rockfall mitigation techniques.
When you need rockfall mitigation you need an expert in the field. Triptych Construction offers 30 years of experience in stabilizing slopes. For information, contact us today at (541) 673-4903 or via our website form.