Removing loose rock along with other blocks of rocks that can make a slope unstable is known as rock scaling. It may be done as an isolated task to prevent small rocks and debris that have been loosened by weather from falling on roadways, or it may be the first step in a larger rock mitigation project.

The Constant Danger of Falling Rocks 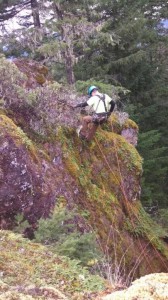 In mountainous areas, maintaining the slopes to prevent beautiful natural formations from turning deadly is a fact of life. While rockfalls in isolated areas may have no impact on humans, those that occur where roads are cut can be deadly. Large chunks of rock can crush a passenger car or cut a semi in half, not only as a result of weight, but from wedged angles the rock may have. Even areas that have no fatalities from falling rocks may have a history of serious accidents as a result of rockfalls.

In 2015, for example, Triptych Construction, experienced rockfall mitigation specialists based in Oregon, worked with two other companies on a section of Highway I-15 between Helena and Great Falls, Montana that was subject to rockfalls ever since the highway was built in 1967. At the time, there was poor understanding of the impact of construction on rock destabilization. The mountains were over blasted with too much dynamite, which fractured rock as deep as 50 feet back. According to Project Manager John Ferryman, potential problems were worsened by frost gap, “which is when water gets between the rock, freezes, and starts pushing the rocks off the slope. Over time large blocks start falling off.”

Dubbed as the D3 Rockfall Mitigation project by the Department of Transportation, the efforts to mitigate the continuous danger on I-15 began with initial rock scaling on a mitigation project that will ultimately consist of anchor wired mesh draped against sections of mountainous cliffs hovering high above the interstate and concrete barriers near the roadway to protect travelers from any rocks that slip through the mesh. Crews of rock scalers first attempted to clear up debris and clear out boulders that are loose and likely to fall.

To do this, the scaling crew, with all the tools and provisions they will need for the day strapped to their backs, climbed to the top of the cliff face and anchored themselves by tying ropes around large trees or around stakes in the ground. They then rappelled down the face of the mountain on the ropes, and tested each square of exposed rock with a four-foot iron bar. When they found loose or compromised rock, they pried it free. The trick was to distinguish between rocks that are potentially hazardous and those that will cause more instability if they were removed.

As Ferryman puts it, any rock that moves comes down. “We call it ‘getting married to a rock.’ If you go up there with the bar and pull on a rock and it jiggles even a little bit, you’re married to it. Now you’ve got to get that rock off the hill.” While a single scaler can pry loose smaller rocks, larger formations that are very heavy or too well-attached may require an “air pillow” to be wedged in the crack to push the rock away from the cliff so that it falls. The scaler might need to use small explosive charges (“bolder posters”) to do the job. On the ground, spotters patrolled the area with an air horn to warn scalers of debris falling from above them on the mountain.

Phase 1 of the D3 Rockfall mitigation project was completed in late 2015, and bids are currently underway for the next phase of the endeavor. Triptych Construction, who intends to be a part of the next phase, always welcomes new clients in need of rock scaling and other rockfall mitigation efforts. For information, just call us at (541) 673-4903 or via our website form.